Dogs Who Changed the World 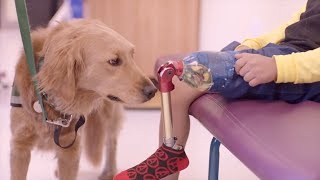 "Dogs Who Changed The World" — Milk-Bone

Pet industry icon Milk-Bone spent nearly two decades supporting Canine Assistants—an outstanding philanthropic organization whose mission is to place service dogs with people in need. The problem was that, while Milk-Bone’s support enabled the majority of these placements, the rest of the world wasn’t aware of all the great work Canine Assistants did. PR Hacker and Milk-Bone agreed that these heroic helpers deserved some time in the spotlight. That’s how our Dogs Who Changed The World campaign was born.

While it’s relatively easy to find journalists to write about great organizations like Canine Assistants, without a proper hook, these stories won’t get the liftoff they deserve. In order to create stories that were newsworthy for mass media and buzzworthy for social media, we localized at scale—showcasing individual dogs in top mass media markets like New York, Los Angeles, and Atlanta.

Milk-Bone feels that every dog has a hero inside, just waiting to be unleashed. The dogs with Canine Assistants, however, have already reached this stage of development. We portrayed these special dogs as the “Olympic athletes” of canines. Our Dogs Who Change The World campaign effectively highlighted the major roles these primo pups play in their families and their communities.

The result? Our viral campaign publicized the great work of Canine Assistants while articulating the impact of Milk-Bone’s contributions to the organization. The month-long campaign became one of the most successful campaigns in the company’s history and is now an annual tradition.

In just one month, Dogs Who Changed the World Was Covered in 50 media outlets reaching 230 million Americans