How Red Bull’s ‘Stratos’ Space Jump Made Headlines From 120,000 Feet 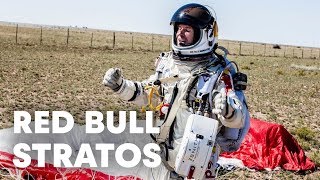 Why We Love Stratos

A. It hits the brand message spot on

The brand’s message: “Red Bull gives you wings” was further emphasized with this mission to the edge of space. The power of this marketing event lies in the synergy between the extreme event and the company’s existing marketing message. That message was amplified exponentially after the event.

B. It was emotional

By crafting up a unique experience, Red Bull was able to capture draw in curiosity and event participation as consumers interacted and engaged with Red Bull on an emotional level. As Red Bull created an event that transcended normal advertising, the engagement and amplification of their messaging solidified as a result.

The jump broke five records, according to the Guinness World Records, and Baumgartner became the first human to break the sound barrier without engine power. And the stunt didn’t just break physical records, but broke the internet as well. Red Bull’s stunt was shown by more than 40 TV stations and 130 digital outlets. Red Bull’s Facebook post-jump photo of Baumgartner gained almost 216,000 likes, 10,000 comments and over 29,000 shares within 40 minutes, and half the worldwide trending topics on Twitter were related to Stratos.

What We Can Learn From Stratos

To break traditional barriers of marketing, sponsorship, and social media, Red Bull featured Baumgartner on live video as he became the first person to break the sound barrier from jumping from space, starting in a freefall 128,000 feet above the Earth that reached a high speed of 843 miles per hour.

One of the key considerations was to capture as much video footage as possible to assist in live video streaming and further content promotion. According to the Red Bull Stratos site, the capsule itself contained nine HD cameras, three digital cinematography cameras, and a further three digital photo cameras. Baumgartner wore three HD cameras on himself, while on the ground even more video technology was deployed.

They provided great content which could be shared and used, both by individuals through social media and for the press. Its social pages contain many high-quality images and video clips through which they can engage their audience.

In the six months following the jump, sales rose 7% to $1.6 billion

A Match Made in Heaven

Red Bull and Baumgartner partner to plan the Stratos mission Red Bull's Stratos campaign is an iconic example of participative advertising and marketing that upped sales 7% in the six months following their support of Felix Baumgartner's mission to break the sound barrier without using engines.

The sales increase in Red Bull following the Stratos campaign

Miles above Earth Baumgartner jumped from

Number of TV stations that carried the jump

Number of countries where the jump was broadcast live

2 Facts About Stratos That Will Blow Your Mind

Baumgartner became the first human to break the sound barrier on his descent, reaching 843 mph, which equates to Mach 1.25.Click To TweetBaumgartner's jump occurred on the 65th anniversary of the day, after Chuck Yeager broke the sound barrier for the first time in a piloted aircraft.Click To Tweet
Think Different? Apple Shows the Link Between Gandhi, Jimi Hendrix & Tech »
« How Absolut Vodka (and Andy Warhol) Turned Its Bottle Into an Icon